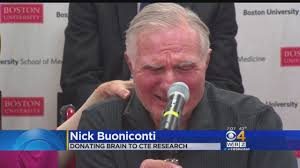 The last several years we have learned about the repercussions of repetitive hits to the heads of our football heroes. Do we really understand though?

We see stories about them on the news or read about them in newspaper articles, focused, not on past glories or achievements, but on present day despair. On regrets. On wishing they had lived their lives differently.

We see these men in what were supposed to be their retirement golden years: days which were planned to be spent reaping the benefits of a football career.

For many, these years are not golden years, and have turned out to be anything but. The days are painful and confusing. They are not spent basking in the adulation of adoring fans, but spent asking themselves this simple question, “Why do I have to live like this? What has happened to my life?”

Now that this issue is finally being brought to light, it is clear these men need our help and support.

It  is a good thing that we are now facing that truth, but there is another angle to this truth, something we talk about, but maybe not seriously enough.

The future of our football players:

Some unknown percentage of the youth college and pro football players; the players you watch trot onto the field to brass bands; the boys and men who run swiftly, make amazing catches and bone crushing tackles; who are being cheered on by cheerleaders and followed by fans with great pageantry; these very players, will be transformed by a degenerative brain disease called CTE into cognitively impaired, depressed, forgetful and possibly violent or suicidal men.

This future transformation will affect some fraction of the entire class of men we refer to as football players. The number of men who will be affected is unknown, but you can be sure that a healthy proportion of the football players you see on the field experience life altering hits to the head during any game you watch, and their lives will change.

And we aren’t just talking about concussions here. Talking about CTE strictly in terms of being caused by concussions is a way to say, “It is serious, but not really that serious.”

We have all been pussy footing around the truth  for a while. It’s about time we recognize what is happening to our young men because of football. The truth is, it’s too late to really help those who have played, other than to support them as they go through life. It’s not too late, however, to do something about those who have yet to play.

The next time you watch those boys or those young man trotting proudly onto the field in full uniform, think for a moment about visiting them in a few decades in a rehabilitation hospital, where you will have the opportunity to thank them for giving up their lives so they could get a paycheck and you could be entertained.

Think about those star players having to be reminded of where they live, or the names of their kids.

Maybe this is a choice they would make, even when fully understanding the consequences. It’s pretty clear, though, that most of the men who suffer from CTE regret having made that choice.

We also never consider the consequences on the families; who must stand by, watching, cringing. They are the caregivers who live it every day with their loved ones, and who these football players become completely dependent on.

But I sort of understand. When you are healthy it’s hard to really feel what having CTE is like, but it’s important to know this is not a sickness or disease  you that you can fight or be tough with. It marches forward and is relentless.

CTE robs you of all you have; including your reason for being alive.

In the end, this is the simple truth: we are watching the destruction of some of the best among us, and we are not just standing idly by, we are cheering every hard hit.

Maybe it was time  we were brave enough to say, “Wait a minute,”  and do something about these players’ futures, instead of wishing  someday that the past had been handled differently.

How I Dealt with Abuse Following A Chronic Injury/Illness

Those of us who have experienced a chronic injury or who have a chronic illness are used to being treated...